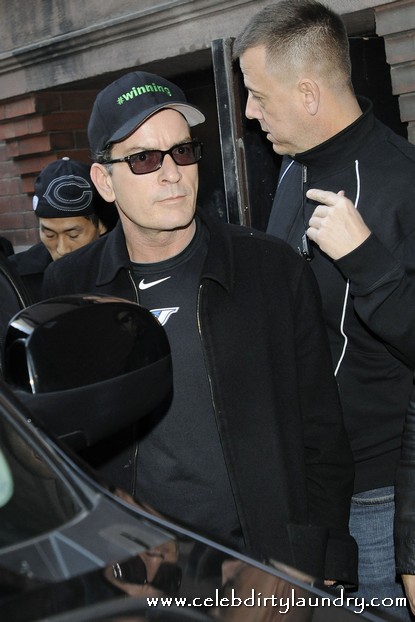 Charlie Sheen took his ‘My Violent Torpedo of Truth Tour’ tour to Massey Hall in Toronto, Canada April 14th, 2011.  This is the first Canadian stop on the tour.   The crowd was kinder to Charlie than some of his stops even though he started the 90 minute show 25 minutes late and ended it 20 minutes early.  Nice considering tickets were $100 pop.  Charlie also once again assured the crowd that his return to ‘Two and half Men was imminent although Warner Brothers made it clear today that no discussions were taking place.

Because of the strict smoking laws in Canada Charlies was not able to chain smoke on stage as he usually does.  Instead he was puffing a artificial electronic “vapour” cigarette but he did not seem to be enjoying it and gave up on it shortly into the show.  Charlie actual left the show for a smoke break and left a parody video of his 20/20 interviews to keep the crowd entertained.

Canadian Brampton, Ontario born comedian Russell Peters co-hosted the show with Charlie.  I guess Charlie though using a local would endear him to the crowd.  However, I am guess Russell is regretting his decision to co-host since the crowd barely paid any attention to him.  All they wanted was Charlie!

The show may have been short on time and short on his usual mania but Charlie pulled it off at the end of the show.  Charlie saw a story today that ran in a local newspaper about widow who credits “Two and a Half Men” for getting her through the death of her husband two years ago.  The lady went to the concert and brought her husband’s ashes she said Charlie reminded her of her late husband and she wanted him to toast her late mate on stage. Charlie pulled a WINNING move and toasted him with a glass of apple cider and said, “I was deeply moved by what I read”