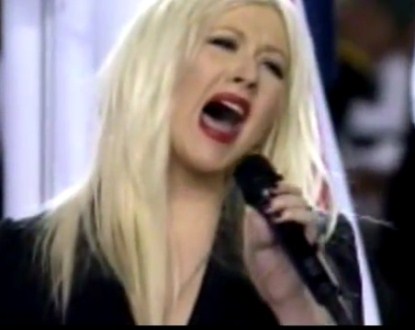 Christina Aguilera was the latest singer to have the honor of singing the Star Spangled Banner at the 2011 Super Bowl XLV.   Singing the athem at the super bowl must be nerve racking and Christina had case of nerves and actually flubbed the lines.  The song started out fine but towards the middle the nerves seemed to get to her and she messed up the lyrics and when she was suppose to sing the forth line she went back and sang a version of the second line.  She seemed to know it happened and picked herself up like a professional and went on.

Below are the actual lyrics of the song:

Oh, say, can you see, by the dawn’s early light,
What so proudly we hail’d at the twilight’s last gleaming?
Whose broad stripes and bright stars, thro’ the perilous fight,
O’er the ramparts we watch’d, were so gallantly streaming?
And the rockets’ red glare, the bombs bursting in air,
Gave proof thro’ the night that our flag was still there.
O say, does that star-spangled banner yet wave
O’er the land of the free and the home of the brave?

Watch the video below