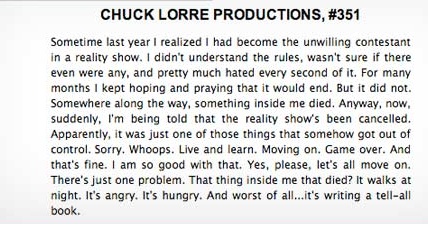 Chuck Lorre is obsessed with Charlie Sheen but what he should be worried about is his lousy new version of ‘Two and a Half Men’ which was bashed again last night by viewers. Besides the fact that Ashton Kutcher is hopeless as a replacement for Charlie, the new episodes have simply been in bad taste – like Lorre’s vanity card shown at the close of last night’s episode.

No matter how much Lorre pretends that he is a superior being looking down on the base Charlie Sheen from some sort of Hollywood heaven, his nasty vanity card proves otherwise. It is Lorre who is stuck in the past and hasn’t gotten over his feud with Charlie – not the other way around.

‘Two and a Half Men’ creator Lorre seems to be overly concerned about Charlie’s plans to write a tell-all book. Is Lorre pompous enough to fear that he will be the focus of Charlie’s revelations? Does Lorre not realize that in fact it’s his feud with Charlie that really made him into a household name?

In last night’s vanity card Lorre insults Charlie as follows: “Sometime last year I realized I had become the unwilling contestant in a reality show. I didn’t understand the rules, wasn’t sure if there even were any, and pretty much hated every second of it.” He added, “Somewhere along the way, something inside me died. Anyway, now, suddenly, I’m being told that the reality show’s been cancelled. There’s just one problem. That thing inside me that died? It walks at night. It’s angry. It’s hungry. And worst of all … it’s writing a tell-all book.”

Lorre is clearly the one angry and hungry for revenge. Just read the card – only a bitter man could write it.

Please go ahead and tell us Charlie – we would rather read your tell-all book than watch Chuck Lorre’s horrid, Ashton Kutcher infested, ‘Two and a Half Men.’