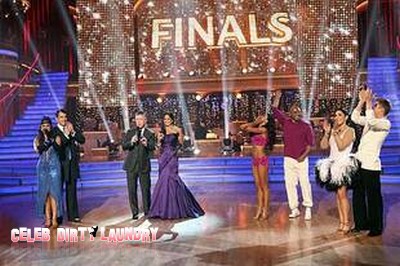 Dancing with the Stars Season 13 is ending and a new Mirror Ball champion will be crowned tonight on the Grand Finale.  The last three couples standing are: Iraq vet and All My Children star J.R. Martinez and Karina Smirnoff; talk-show host Ricki Lake and Derek Hough; and reality star Rob Kardashian and Cheryl Burke.  After last night Rob & Cheryl are at the top of the leaderboard and Ricki/Derek & JR/Karina are tied at the bottom.  If you missed last night’s episode you can read our official recap here!

On tonight’s show the remaining three contestants will dance a favorite dance of theirs.  Rob has chosen the Foxtrot, JR has chosen the Jive and Ricki has chosen the Psycho Tango.  After the dance the judges scores will be added to the audience’s score and one contestant will be immediately eliminated. The remaining two contestants will dance their last dance. They will compete for the Mirror Ball trophy in their Instant Samba. Once again, the judges will vote for the last time and the Mirror Ball trophy winner will be announced.

Who will win the Mirror-ball Champion Trophy?  We conducted a poll today and 51% of viewers give the win to JR Martinez with Rob following a close second with 40% of the votes.  The race is too tight to predict right now, but we will see know.   As host Tom Bergeron said last night it is  “The brawl for the Mirror Ball!” and the contestants are certainly battling it out till the end!

Tonight’s show:  The show opens with a group performance which included the full cast of Season 13.   They show a recap of the remaining three contestants performances last night to give us the spirit of the three finalists.  Lady Antebellum debuts their song ‘Dancin’ Away With My Heart.’

Judges comments – Len said: This is one of the most memorable dances of this or any season, I loved it the first time and I loved it more this time. Bruno said: That was more than a tango, combining drama and brilliant dancing, unforgettable!. Carrie Ann said: You are the last women standing, you have proved you are a fighter. It was fantastic, beyond good.

SCORE – Ricki was scored in second place and he got a 30 addded to last night’s total she is in first place with a 84!

Rob Kardashian and his partner Cheryl Burke dancing the Foxtrot.

Judges comments – Bruno said: First let me say you have really changed beyond expectiation, you are smooth and suave you have your mojo. Carrie Ann said: I am glad you did that song it was elegant, everything looks like it comes easy to you, good job! Len said: The little slip does not mean anything you got the best footwork to virtually any guy I have seen, you have musicality, you have grown as a dancer, your confidence, everything great job!

SCORE – Rob was scored in third place and he got a 26 addded to last night’s total he is in second place with a 83!

JR Martinez and his partner Karina Smirnoff dancing the Jive

Judges comments – Carrie Ann said: You had a bit of a rough time there but you are a catalist for joy. I agree with the crowd but I saw a few oops. Len said: There are good weeks and bad weeks but what is always consistent is the band and the singer. You did what I asked you took out the lindy. Bruno said: What you did was energetic, fast paced, fun, fun, fun and I loved it.

SCORE – JR was scored in second place and he got a 28 addded to last night’s total he is in third place with a 82!

ROUND 2 – The video of the instant Samba is HERE!

Len said: These two couple have had ten weeks of difficult times, hard work and they had to do a Samba the hardest of all the dances.   Len got up and gave them a standing ovation.  Bruno said – you can turn it on at will, people love you.  Rob said – you really learned to use your bon bon’s.  Both of you brilliant.  Carrie Ann said – both of you are winners.  Success does not come to you, you have to go to it and you both went for it.

Now they have to add the view votes to see who wins!