BY Robyn Good on April 18, 2011 | Comments: Leave Comments
Related : Dancing With the stars, Dancing With The Stars Season 12 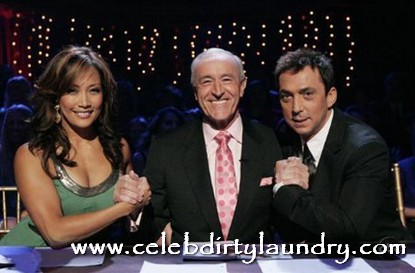 Last week Sugar Ray Leonard got knocked out of the competition tonight we pledge a legions to the mirror ball and song of America. We are half way through the season and no one has come out as the leader, eight stars remain.  Tonight is the celebration of the red white and blue. All the routines will be performed to songs that salute America.

The first couple up is Ralph Macchio and Professional Dance Partner, Karina Smirnoff dancing the Samba to Sweet Home Alabama. Len said, ½ ways though season 4 and one week you are there and another work it is not working. It was not terrible but you are not consistent. He has to work on rhythm. Carrie Ann said, excuse me you two it is Americana week. I think it was a great entertainment performance. Bruno said, I have to agree with Len but we are looking for Samba and it needs fire down below you have to get the hips going. You do the character well but you need the hips.   Scores:  Carrie Ann, 8 Len, 7 Bruno, 7 Total = 22.

Chris Jericho and Professional Dance Partner, Cheryl Burke are dancing The Viennese waltz to America The Beautiful.   Bruno said, big but graceful, elegance with a sweeping sense of romance it was absolutely wonderful. Carrie Anne said, in some way I believe we have underestimated y u u are a contended. Len said, Week 1 you got a 6 when u deserve an 8 I will give you one. It was a little flat footed your hold and postured were good.   Scores:  Carrie Ann, 9 Len, 8 Bruno, 9 Total = 26.

Petra Nemcova and Professional Dancer, Dmitry Chaplin dancing the Quick Step to Viva Las Vegas.  Carrie Ann said, she loves watching her but tonight she felt she took a bit of a step back because she has a few stumbles. Len said, it was a very fast dance and she coped very well.   She has a lot of potential. Bruno said, says he disagrees with them – the dance was very quick and she is the golden goddess. There were a couple of footfalls but the quality was very good.  Scores:  Carrie Ann, 7 Len, 7 Bruno, 8 Total = 22.

Romeo and Professional Dancer, Chelsie Hightower dancing the Foxtrot to New York, New York.  ?Len said, feels that he is on the right track, well done. Bruno said, he has swagger and spunk and full of flavor, well done. Carrie Ann said, she remembers week one when he resisted because it was not cool but let me tell you that was so cool.   Scores: Carrie Anne, 9 Len, 8 Bruno, 9 Total = 26.

Hines Ward and Professional Dancer, Kym Johnson dancing the Rhumba to God Bless the USA.  ? Bruno said, ease of move, musicality and just the right amount of sensuality to make the ladies sway. Carrie Ann said, he makes it look easy and he has the best hip action. It was very romantic. Len said, what he likes it is not forced and he feels it was his best dance.  Scores: Carrie Anne, 9 Len, 9 Bruno, 9 Total = 27.

A guest appearance by “The Dance Doctor” John Travolta who gave Kirstie and Maks some advice to just have fun!

Kirstie Alley and Professional Dance Partner, Maks Chmerkovskiy dancing the Foxtrot to American Women.  Carrie Ann said, felt it absolutely suited her it was bold and ambitious and her best dance ever.  Len said, it had attitude but overall felt it was not his cup of tea.   There was very little excellent.  Bruno said, Loved it!  Scores: Carrie Anne, 8 Len, 7 Bruno, 8 Total = 23.

Kendra Wilkinson and Professional Dance Partner, Louis Van Amstel dancing The Foxtrot to Yankee Doodle.  The will be dancing the 1,000th dance on Dancing With The Stars.  Len said,  it is much better than last week fun and entertaining.  Bruno said, it is as cute as apple pie but she has to stop thinking about it.  Carrie Ann said, she is confident and like a fighter.  Scores: Carrie Anne, 8 Len, 7 Bruno, 7 Total = 22.

Chelsea Kane and Professional Dancer, Mark Ballas are going to dance the Samba to Party in The USA.  Bruno said, she has all the positive energy of America and her dance is very clean and she is a good dancer.  Carrie Ann said, they dance great together and it was fantastic.  Len said, this was real good fun.  Well Done!   Scores: Carrie Anne, 9 Len, 8 Bruno, 9 Total = 26.

Don’t forget to stop by to visit us tomorrow where we will recap the result show!