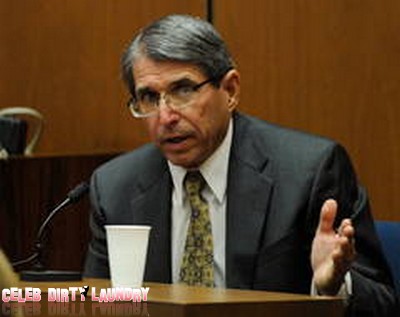 It was a bad day for Dr.Conrad Murray in his trial for the involuntary manslaughter of Michael Jackson. His key defence witness, Dr.Paul White, not only told the jury that Murray put Michael’s life at risk but then Dr. White was nailed by the Judge for contempt of court and fined $1000. Dr. White refused to heed judge Michael Pastor’s warning not to talk about a conversation he had with the defendant.

As the prosecution and defence teams wrapped up their cases in court on Monday before turning to jurors for a decision, there was final drama during expert witness Dr. Paul White’s latest day in court, when he repeatedly violated orders to refrain from testifying about private conversations with Dr. Murray.

White is the defense team’s final witness and the linchpin of their case.

It’s the second time Pastor has held White in contempt – he used a profanity during a heated exchange with a member of the prosecution team on 21 October. The judge recalled White back to court for a hearing on 16 November.

On Monday, the courtroom was briefly cleared after Dr. White referred to a conversation he had had with Murray, who is accused of administering the fatal dose of anaesthetic Propofol which cost pop star Michael Jackson his life. Judge Pastor told him he could not offer up private responses he’d had from Murray.

Less than two hours later, White upset Pastor further when he testified he had additional information to share with the jury but the judge told him he couldn’t.

He was held in contempt and fined.