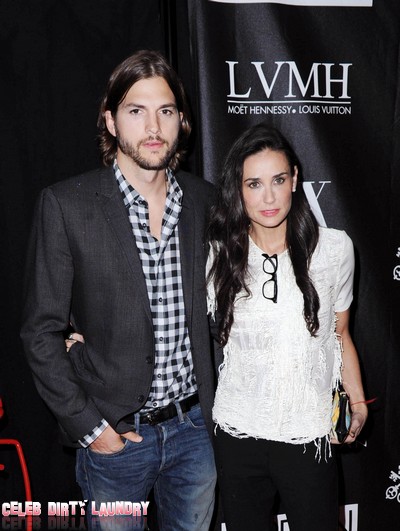 Ashton Kutcher was carted off by Demi Moore to Bruce Willis‘ Caribbean holiday home in the Turks and Caicos Islands so that she could make a last ditch effort to save their faltering marriage.

The couple spent the weekend at Bruce’s place but we don’t know whether Bruce was there playing the role of marriage counsellor. Their relationship has been rocked by the recent accusations made by 22-year-old Sara Leal that Ashton had sex with her at a San Diego hotel room in September.

Sara claims she and Ashton had sex twice in the early hours of September 24 telling the Sun:

“We had sex twice. Everything felt natural. We were having a good time. One thing led to another. He was good but it wasn’t weird or perverted or creepy. I was attracted to him and he was attracted to me. He had great endurance. We were up for a while. It was about two hours.”

Sara went on:  “In the hot tub it was me and my friend Marta and Ashton and his friend. Later my other girlfriend, Alexis, joined us but she just put her feet in and didn’t take her clothes off. Ashton looked hot naked.  Alexis started asking all these random questions. She was like, ‘Aren’t you married?’ He said, ‘I’m separated.’”

Well Sara need no longer worry – Ashton is no longer happily married – he is just married!

Despite the affair, Ashton, 33, and Demi, 49, have been working hard to repair their marriage and are determined to stay together. This won’t be an easy task and we can see the toll its taking on Demi who looks absolutely skeletal these days.

A source told UsMagazine.com: “Things have been very strained. [But] they’re trying to figure things out.”

I can figure things out for them – get divorced!