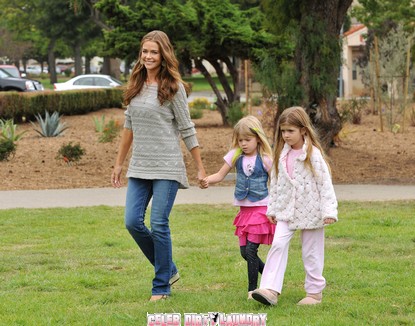 True to the Hollywood credo of money always comes first, Denise Richards is writing a tell-all about her marriage to ex-husband Charlie Sheen that included the birth of two children and “one of the worst divorces” in Hollywood, she says.  Richards and Sheen ended their marriage in 2006 but not before having two daughters, Lola, 6, and Sammy,7.

The children live with Denise and she refused to let Sheen see them following his cocaine and alcohol binge at the Plaza Hotel in New York, which ended with a naked prostitute locked in Sheen’s bathroom afraid for life and Charlie dragged to hospital by the cops.

During this family vacation gone wrong, Richards, 40, and the children were also at the hotel although they were staying in a separate room on the same floor.

Denise claims they once shared a “beautiful love story” that ended in bitterness.  She said she decided to write the memoir to tell the full story of their marriage with an eye to helping people in similar straits. “I went through a lot and I get asked a lot of questions about that time in my life so I figured that I would share my story and hopefully, anyone that is dealing with challenges will know that there is a light at the end of the tunnel,” she said.

Richards was attending the Time for Heroes Celebrity Carnival Sponsored by Disney to Benefit the Elizabeth Glaser Pediatric AIDS Foundation. “People have only gotten the rotten stuff so, you know, there was a beautiful love story between he and I and I know that it went the way it went,” she added.

“But I talk more about how I felt during that time because I feel like a lot of women can relate to going through a divorce and custody and being a single parent and trying to work and all of that stuff.”

I’m sure that Denise Richard’s life and divorce is about as close to what most women experience as Charlie Sheen’s life is to most men’s.