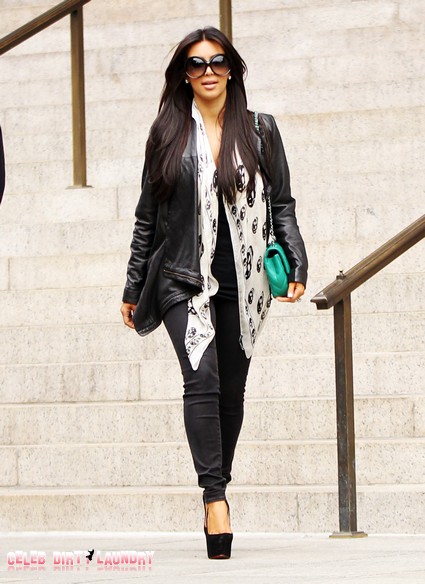 Kim Kardashian is so desperate for some good publicity and positive press – her image is so tarnished after filing for divorce from Kris Humphries – that the spoiled prima donna famewhore is flying to earthquake ravaged Haiti for charity work. Can you imagine Kim stooping to this level – pretending that she cares about the plight of Haitians as they try to rebuild a society practically destroyed by the deadly 2010 quake.  She will do anything she can to boost her image which is at an all-time low. I can just see pampered Kim getting down and dirty in Port-Au-Prince.

Kim is in Haiti with the charity group We Advance, along with her mother, Kris Jenner, and Prime Suspect star Maria Bello, who co-founded the organization. Kim made the trip to support the group, whose Web site says it’s “a movement to advance the health, safety, and well being of women throughout Haiti.”

“She connected with Mario Bello and is there with Maria’s foundation and also with her mom,” a source close to Kim revealed. “Her intention was always to take the end of the year to focus on some of the other things that are important to her and this trip was one.”

The source added: “Kim’s father instilled in her and her siblings that every little bit counts and she always tries to do as much as she can – whether it’s privately or whether it’s something that she can use her platform for – to help.” What a load of bull – Kim’s dad, Robert Kardashian Sr., helped his buddy O.J. Simpson beat his murder rap – was that his idea of charity?

Anyway – there might be a positive outcome for Kim with her Haitian vacation – she might meet her next husband there.