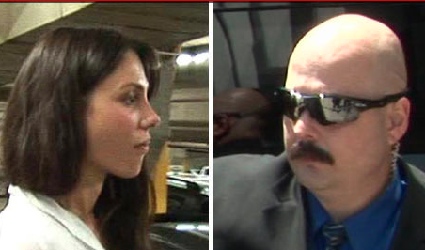 Oksana Grigorieva’s bodyguard, Kristian Herzog, who is now a Mel Gibson informant, has used his tell-all book to detail how he allegedly made love to Oksana, who he referred to as the called ‘The Sexual Sorceress’.

Kristian Herzog, who was fired as Grigorieva’s personal protection after it emerged he was a twice-convicted felon who impersonated a cop with a loaded firearm, is touting his book as “the true Hollywood story” of Mel’s true romance with Oksana.

“Everyone went from hero to zero in less than 60 seconds,” Herzog wrote, in a preview of the book.  He claimed Grigorieva, 41, “seduced him with her suffering” and “played my instrument like a cheap instrument, her soft warm inviting mouth and sorceress tongue controlled me.”  Herzog added:“The Bodyguard becomes the Lover, making love to Oksana.  If lips were ships, her lips were the S.S. Titanic, dragging men down deep.”

Oksana has emphatically denied the pair were ever intimate.  Oksana’s spokesman Steve Jaffe said Herzog’s book was full of “outrageous lies” and said the sexual references being made were “too absurd for words.”  In another chapter from Herzog’s book, titled Storm Surge, he recounted how he became “the Chief Adviser and attending all the attorney meetings with Oksana about Gibson.”

Grigorieva has claimed Gibson, 55, punched her in the head on January 6, last year, at his multi-million dollar Malibu mansion, knocking out two veneers on her upper front teeth while she held their then-infant daughter Lucia.  The Lethal Weapon star pleaded no contest, with no admission of liability, to a misdemeanor battery on a spouse or cohabitant in Los Angeles Superior Court on March 11.   Once a passionate supporter of Grigorieva, Herzog has since swapped camps and will be deposed by Gibson’s lawyers at some point during the pair’s civil case.

“I thought I was protecting a real domestic violence victim, I was very wrong,” he wrote.  Herzog said he “learned the truth about what really happened on Jan. 6,” detailing what he said was “the fake assault… fake tapes (and) the real $15 million extortion of Mel Gibson.”

We have to doubt Herzog since Oksana rejected the $15,000,000 settlement offer despite her lawyers pressing her to accept it.  If she were in fact extorting the money and and an agreement was made to pay it then she would naturally have accepted the payment.  Herzog final chapter is dedicated to the day he said he become “the number one witness in the biggest celebrity break up case of all time.”

His also promised to detail juicy nuggets about other celebrities, including what he called ‘The Fab 4’ — Britney Spears, Paris Hilton, Lindsay Lohan and Kim Kardashian – and ‘The Fantastic 5’ — Jon Voight, Jack Nicholson, Jessica Alba, Senator John McCain and President Barack Obama.  Grigorieva’s legal team said it had done its own investigation into Herzog and discovered he isn’t who he says he is – he would often insert himself into photos with stars at various public events, then suddenly claim he worked as their bodyguard.  “This man is a convicted felon and an impostor,” Jaffe said.

“He talks of being hired by celebrities like Jack Nicholson and Jon Voight and others. Totally false.”  “According to Jack Nicholson’s manager, Jack has never heard of this guy.  Jon Voight told me he never hired Herzog, he just allowed some photos to be taken after Herzog introduced himself as a Vietnam vet to Voight who is very supportive of all vets.”

Grigorieva’s rep added: “Herzog was never – not ever – hired by Oksana Grigorieva.  That’s a fact.  He insinuated himself into her life in order to attempt to destroy her reputation which he continues to do with this ‘book’ filled with outrageous lies.  He calls himself the “Star Witness” in the Gibson v. Grigorieva case but wouldn’t show up for his deposition to testify under oath before Gibson’s attorney.

“He has no credibility.  He calls the “tapes” fake even though Mel Gibson never asserted that they were fake.  He says the assault was faked even though Gibson pleaded No Contest to the assault against Oksana.  As for the sleazy sexual references, they are too absurd for words.”

Nevertheless Herzog will probably make a fortune off of his lies – people will still buy the book even though he is an obviously fake.