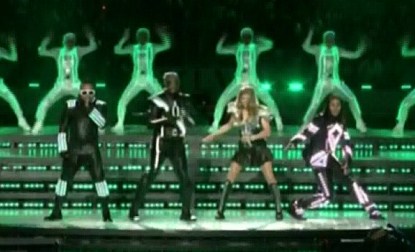 Fergie and The Black Eyed Peas opened up the Super Bowl XLV halftime show dressed in futuristic leather outfits, with “I Gotta Feeling.”   They followed the song up with Boom Boom Pow.  The track then mixed into the Slash song Sweet Child of Mine, with former Guns N’ Roses star Saul Hudson making an onstage appearance.   He played the guitar as Fergie sang.  But it did not stop there after a performance of Pump It and Let’s Get It Started, Usher came on stage.  He sang  Oh My God with will.i.am who produced the song.  They ended it off with The Time of My Life, which segues back into I Gotta Feeling, the opening song of their setlist.

Depending on who you listen to the show was either Boring and Confusing or Spectacular.  The video is below for your enjoyment let us know what you think?