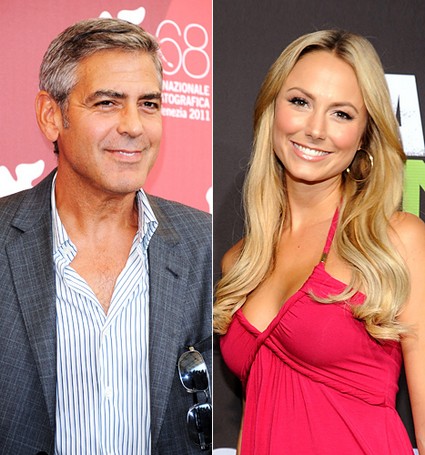 So I guess the rumors are true!!  Over the summer whispers started circulating that newly single George Clooney was single no longer.  And the lucky lady is none other than WWE Wrester Stacy Keibler.

George, 50, wasn’t single for long following his breakup with Elisabetta Canalis.  But is he ever really single for long?  Not so much.  I’m just surprised that ladies man George is dating a blonde.  Either way, the two made a public appearance in Toronto for the 2011 Film Festival while dining with some friends at the Ritz-Carlton.  They munched on cured meats, and were then seen leaving arm and arm together.

Will the self-described ‘guys girl’ Stacy join George on the red carpet for the premiere of his two films The Ides of March and The Descendants?  We shall soon find out Friday and Saturday, respectively.