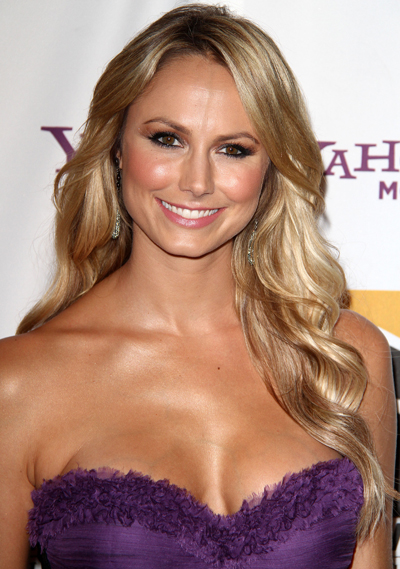 Unlike Elisabetta Canalis and other one-time girlfriends of George Clooney, Stacy Keibler has her eye on the prize! No, not to marry Clooney or have his babies (because, let’s face it, that’s just not going to happen) but to be engaged to…Ryan Reynolds!

During a recent interview, E! brought up the fact that the 32-year-old actress and former professional wrestler had joked several years ago, long before she had ever met George, that she’d like to be engaged to The Descendants star. And, now that she is actually dating him, Stacy is evidently already day-dreaming about her next movie star boyfriend.

“You have to really be careful with this, I guess, what you say,” she said. “If that works…I really hope I could be engaged to Ryan Reynolds! Yeah, the power of manifesting!”

Although there’s no word on whether Stacy has met Ryan (or, if Ryan, who is reportedly dating Blake Lively, would want to hookup with George’s cast-offs,) we doubt that the two actors will be dueling over her any time soon.

For now, it looks like Stacy will just have to content herself with being Clooney’s girlfriend du jour and spending Christmas with the former Sexiest Man Alive.

“We’re going to be having a lot of friends and family going together this year, so it will be fun,” she said of their Christmas plans, adding, “It will be easy and it will be relaxing.”

Why do we have a feeling that “fun and easy” is just the way George Clooney likes everything in his life?