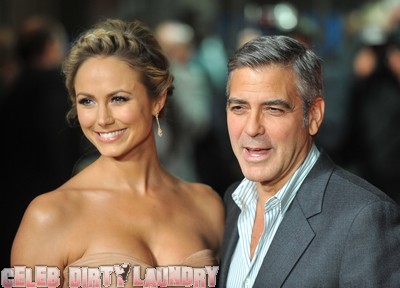 They haven’t been dating for long, but rumor has it that George Clooney is already smitten with his girlfriend, Stacy Keibler.

We all know, that given his past track record with the ladies, that she’s only temporary. So perhaps he’s just enjoying his time with her until she utters the words “commitment” or “marriage”. We’re going to give this one a year and a half to two years, tops.

For now, he’s taking her to events and it appears that he’s quite taken with her. They aren’t said to be too affectionate in public, however, he does make sure that she’s taken care of.

A snitch revealed, “She came with him, and he watched her step out from the car. She is amazing to look at in a long strapless grey gown. She is incredibly beautiful.”

Is this snitch on the Keibler payroll?!? They’re laying it on kind of thick, aren’t they? Sure, she’s pretty, but the praise is being gobbed on.

The source went on to say, “They came around 11:30 and stayed until well past 2:30 in the morning. They hugged some together, but weren’t what you would call very kissy-kissy in public. But he is remarkably attentive towards her. He seems very smitten. And she seemed very impressed by the evening.”

Not surprising. How many more events will they attend together before she becomes another notch on his belt?