Haunted House: A Review of ‘Martha Marcy May Marlene’ 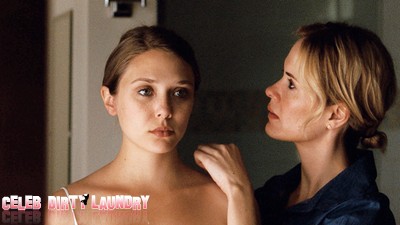 To say that ‘Martha Marcy May Marlene’ is a edge of your seat thriller would be an understatement. Eerily subtle, the film cannot compare to gruesome horror films because it illustrates something much worse. The narrative titers on the reality and nightmare which Martha (Elizabeth Olsen) can barely distinguish between. The story begins with Martha, unsure of where she is, calling her sister Lucy (Sarah Paulson) from a pay phone. It is not clear where Martha has been or what has happened to her. Yet when she moves into her sister’s Connecticut home, it becomes apparent that she is scarred by her previous existence. Though the word ‘cult’ is never uttered, a string of flashbacks indicates such.

Lucy and her patient husband Ted (Hugh Dancy) are ill-equipped to handle Marcy’s paranoia and hysterical outbursts. The juxtaposition of her sister and brother-in-law’s mindset and that of the cult followers is intriguing. Lucy has an oversized weekend lake house and is concerned with trivial matters, like Martha dripping on her floor after she has showered. Ted is clearly burnt out from a grueling work schedule yet instructs Martha to think about a proper career. The couples narrow views, they want to acquire things and ‘progress’, has been conditioned by one of the largest cults: American consumerism.

The depiction of the psychological torment that Martha (who’s name is changed to Marcy May) endures, though ‘Black Swan-esque’, is incomparably genuine. She is convinced that the gang is coming for her. She even pees herself after hearing pinecones fall onto roof.The film conjures thoughts of notorious cases such as Jonestown, the kidnapping of Patty Hearst, and the Manson family. What has baffled most about these cult incidents is how mind manipulation coerced a group of people to commit horrific crimes. The offers a window into this ritualistic process. One of the most frightening scenes, in which the ‘family’ carries out a random home invasion, evokes elements of the Tate/LiBianca murders of 1969. Just as ‘Jaws’ provoked a fear of beaches, ‘Martha Marcy May Marlene’ discourages any future visits to the Catskills.