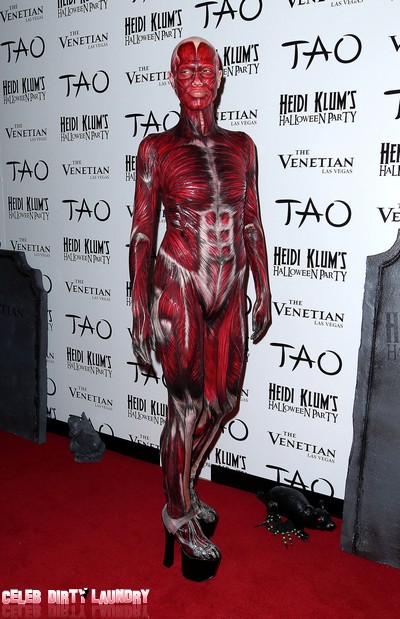 Heidi Klum’s 12th Annual Halloween Party was hosted by Tao Nightclub At The Venetian Resort and Casino Las Vegas, Nevada.  Heidi’s Halloween parties have been held annually for 12 years now and have earned a reputation as a fun event,  many celebrities come dressed in a variety of costumes.  Heidi does her best every year to create an interesting costume for herself and this year is NO exception.

Her costume was a bodysuit which has anatomical designs to provide the illusion of a dead body, the skin of which has been ripped off.  The costume is certainly gruesome looking.  Check it out the pictures above and below!

She told People magazine this about the costume: “It’s kind of like a dead body with the first layer of skin ripped off… It’s basically like me naked.” She added, “All my veins and blood will all be visible — you don’t feel quite naked with it because it is so colorful.”

What do you think of her costume?  Take a look at her shoes they are bones ughhh.. creepy!