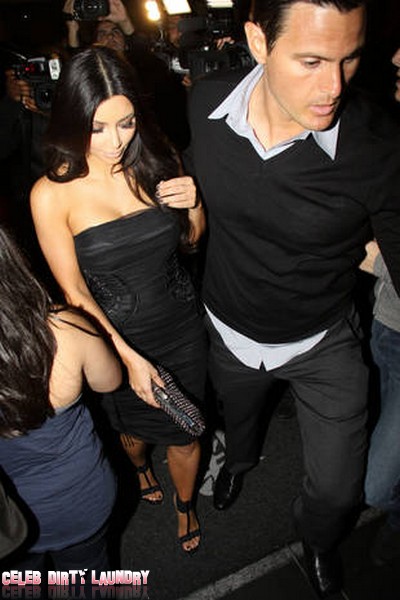 It was surprising that Kim Kardashian went to Australia as planned almost immediately after filing for her surprise divorce. Was she trying to get away from the crushing media attention – was she just trying to stick to her work schedule? Now it comes out that Kim had a hidden agenda in flying to Australia so soon after announcing her divorce: she was desperate to see her Sydney-based ex-boyfriend and former bodyguard Shengo Deane, and had hoped to reconnect with him while in Australia.

While it appeared that 31-year-old Kim was just adhering to her famed work ethic and trying to look like she was okay with the divorce it now turns out that hooking up with Deane might have been the major motive for her making the trip to Australia.

The Australian Woman’s Day broke this story:  Woman’s Day has learned the curvy Keeping Up With The Kardashians star is still hung up on her Sydney-based ex-boyfriend and former bodyguard Shengo Deane, and had hoped to reconnect with him while Down Under.

“Everything in Kim’s life is scripted, but her passion for Shengo was the real thing,” a well-placed insider tells us. “Heading to Australia is the perfect opportunity to mend her heart with a guy that she’s honestly crazy about.” The pair had a brief but intense relationship last year and had even discussed marriage, but the lovebirds were cruelly torn apart when Shengo’s US visa ran out and he had to return to Oz. “I’m so sad that you have to go,” a heartbroken Kim cried when she learned their fate. “It’s really hard to have a connection with someone and then they just leave, and you have no idea when you will ever see them again.”

Shengo, 31, who is single after recently separating from his wife, was the only man who made Kim feel safe, friends say. The brunette beauty had even briefly toyed with the idea of following him to Australia. Instead, the pair kept in touch via text messages, continuing to talk even after Kim’s marriage to 26-year-old Kris. “It bothered him [Kris] when he found out, but she said they were just friends,” one mate reveals.

Could Kim’s burning love for Shengo Deane be the true reason behind her divorce? What do you think?