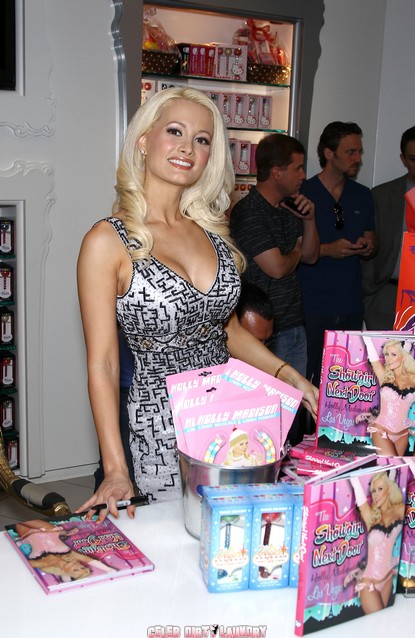 Peepshow and Holly’s World and Hugh Hefner’s former No. 1 girlfriend  Holly Madison, 32,  signs copies of her new book,“The Show Girl Next Door: Holly Madison’s Las Vegas”, at the Sugar Factory inside Paris Las Vegas, Nevada on November 11th, 2011.  Since being Hugh’s girlfriend and one of ‘The Girls Next Door’ Holly’s career has certainly taken off since she left the playboy mansion.

She has a hot reality TV series Holly’s World, which has been renewed for its third season on E! Entertainment.  Holly also stars in a topless burlesque show Peepshow at Planet Hollywood in Las Vegas and she recently said that negotiations are already underway for her to continue in Peepshow through 2012.   She is now adding author to her accomplishments.

Meanwhile Holly was recently seen enjoying herself at a fun day at Disneyland with friends.  She looked looked fresh faced and casual as she rode the log flume with her best friend Josh Richardson and another male friend.

Click on the thumbnails below to enlarge 12 more pics!