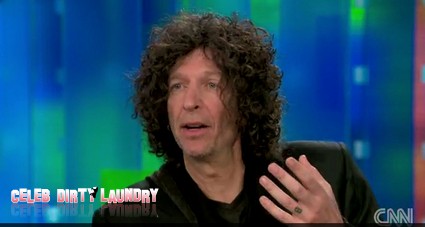 Howard Stern had a great venue on CNN’s Piers Morgan Tonight on Thursday to defend his selection as Pier’s replacement judge on America’s Got Talent against the Parents Television Council’s complaints.

The PTC is a self-proclaimed conservative watchdog group concerned with ‘family values’ that accused NBC of ‘desperation and having lost its way’ in picking shock jock Stern for the job. The PTC correctly labeled Stern ‘a performer who is synonymous with shock, profanity and obscenity.’

And It’s true – Stern’s claim to fame ON RADIO is to be shockingly sexually vulgar and to hold nothing sacred. The catch here is, as TMZ’s Harvey Levin has pointed out, Stern is a very clever guy who can obviously temper his persona to meet the standards of a family TV show. You can be sure that the version of Stern appearing on America’s Got Talent will be a mere shadow of the vulgarity volcano we hear on SiriusXM. The fact is that Stern is a very sharp and funny man – apart form all the sexual stuff – and will probably make a great addition to the show.

Stern told Piers that alarmist groups like the PTC overreact by saying “I’m some sort of weird pervert who’s going to convert America into some kind of zombie sex fiends.” He added: “But I can assure you and the rest of America what I’m looking at here is to be a very good judge. To sit there, I take it seriously, you know I watched the show.”

The PTC is just ridiculous – their argument against Stern is analogous to saying you can’t invite a stripper to a Christmas party for fear she will take off all of her clothing – NO – the stripper strips professionally at the strip club and at your Christmas party she will simply drink eggnog. Howard Stern is more than clever enough to know the difference between the expectations and liberties of his shock-jock radio show and the boundaries of NBC’s family oriented America’s Got Talent… but the PTC is apparently not. Of course there is no doubt that a little shock value is what just NBC wants… else why hire Stern?