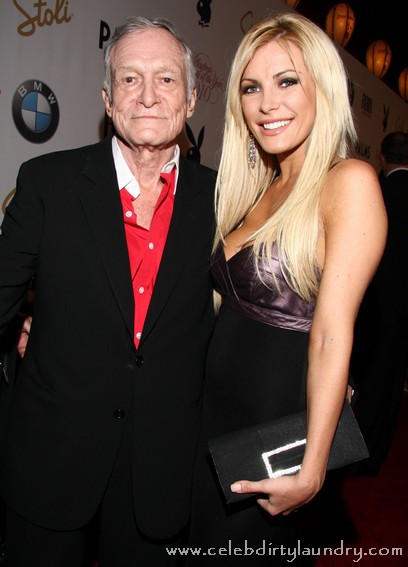 Why does the pop music industry continue to torture us by taking manifestly talentless celebs and trying to make them into singing stars?  Is there a shortage of real talent out there or do they just like to save money on the publicising of new talent by taking the already famous and sponsoring their metamorphosis into music sensations?   First Paris Hilton, then Kim Kardashian, Heidi Montag, and now Hugh Hefner’s Playmate fiancée Crystal Harris.  These people can’t sing their way out of a bathroom shower but still millions of dollars are being wasted on them trying to produce another Cher or Madonna.  Even worse, the resources used attempting to turn straw into gold could have gone into developing and promoting legitimately talented people.

Crystal Harris will be releasing her first single “Club Queen” in June, right before her big wedding to Hefner but of course she’s not doing it alone.

We hear she’s pulling out some big guns to make sure her pipes are in perfect pitch enlisting the help of famed vocal coach Seth Riggs – who has also helped the likes of Madonna, Stevie Wonder, and Diana Ross.

It will take more than Seth Riggs to create a Diana Ross out of a Crystal Harris.