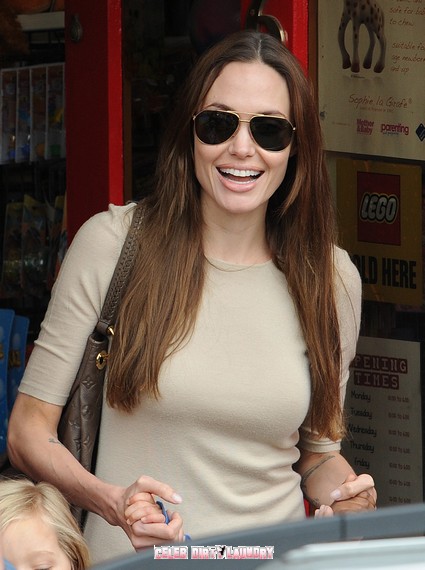 A lucky reporter interviews Angelina Jolie over Lunch in California and what follows are the highlights with all sorts of details you want to know about Angelina.

Angelina orders mint tea and explains that she chose the location for the interview because she is using an office at the studio to put the finishing touches to her directorial debut, ‘In the Land of Blood and Honey,’ a love story she also wrote, which is set in the Bosnian war. It’s a low budget affair with a little-known cast and today is her final day of post-production. “This is the crazy day,” she says, looking at the menu. “We’re down to the wire. Today at 4 o’clock we make the call and it’s all over. We’re locked and there’s no changing it.”

In addition to making films, Jolie, 36, has six children and a raft of humanitarian commitments with the United Nations as an ambassador with its High Commission for Refugees. Over the years her UN role has involved visits to camps in countries such as Sierra Leone, Pakistan and Ecuador.

The interview takes place in Los Angeles at Universal, home to Steven Spielberg’s production offices, several sound-stages and the sets of numerous television shows. Inside The Grill, framed prints of classic Universal releases such as The Birds and The Creature from the Black Lagoon hang on the walls. In person, her beauty is amplified; her eyes sparkle mischievously when she laughs, her celebrated lips frame a set of blinding white teeth. She says she has brought her daughters with her for this trip. She explains that she and Pitt tend to travel everywhere with them and the family is never in the same place for long. “We take turns working so one of us can be home with the kids. It’s been hard – I’ve been [in Los Angeles] for a week and it’s very unusual to separate for this long. I brought the girls so we’re having a special girl trip. All the boys are hanging out with Brad … he’s filming a zombie movie [World War Z].”

‘I was breastfeeding, reading this action script and thought, “I need to get out of my nightgown and I need a gun.”‘  The Jolie Pitt family is a miniature League of Nations. Their eldest son Maddox, who is almost 10, was adopted in 2002 from his native Cambodia. Zahara, aged six, was born in Ethiopia, while Shiloh, the couple’s first biological child, was born five years ago in Namibia. Pax, whom they adopted four years ago, was born in Vietnam and three years ago, Jolie gave birth in France to twins Knox and Vivienne. “They are all learning about each other’s cultures as well as being proud of their own,” she says. “So it’s not like just the boys get to do the Asian thing. They all have their flags over their beds and their individual pride. We owe Vietnam a visit, because Pax is due. Z wants to get back to Africa, and Shiloh too. So everyone takes their turns in their country.”

She has been to Cambodia this year, to shoot an advertising campaign for Louis Vuitton with Annie Leibovitz. An impoverished country might seem like an odd place for a luxury fashion house to shoot an ad campaign but the final decision was made by Jolie herself. “To actually do it there, to highlight the beauty of the country, was something I was very happy to do because it is a place people should travel to,” she says. Indeed, she and Pitt have a house there – “it’s a little place on stilts.” Her fee from the campaign will go towards charitable projects in the country, she says, building on work she began with a foundation the family established in Maddox’s name. “It’s focused on protecting mountains from deforestation, poaching and clearing landmines. We put it together for Mad so when he’s older he’ll hopefully take it over.”

Given how much they travel, where do they consider home? “Home is wherever we are.” Does she feel rootless? “Yes, but happily. I ’m very bad at staying in one place. I’m also bad at sitting still. I was a terrible student at school. But there’s so much to explore in the world … so I love travel. If you can travel I think it’s the best way to raise kids.”

To read more of this interesting interview visit The Financial Times!