Is Pippa Middleton Hunting For A Duke? Jealous of Kate? 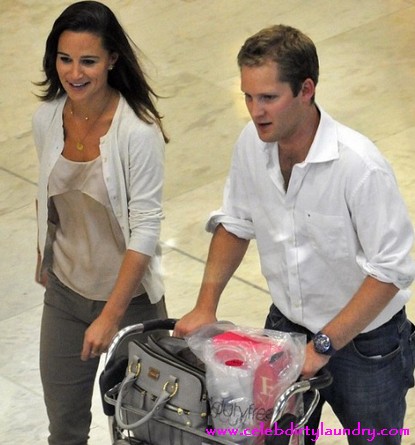 Shortly after the wedding there was a lot of speculation that Pippa would soon marry her boyfriend former cricketer Alex Loudon.  But today Alex was nowhere to be seen when Pippa landed in Madrid, Spain with her ex-boyfriend George Percy, the 26-year-old  son of the Duke of Northumberland, one of Britain’s richest men.  One has to wonder if regardless of all the attention Pippa is receiving could she be jealous of her sister who will be Queen one day.

Pippa has known George for ten years, they dated  and lived together while they were in University.  George helped Pippa with her luggage as they headed to the hotel and later emerged for a night on the town carrying a bottle of champagne.  They both looked very cozy together.

Strange that Pippa would head to Spain with her ex and not her boyfriend. I cannot imagine Alex is very happy about his girlfriend being away with her ex boyfriend George.  I wonder if Pippa has decided because she is the “it” girl of the moment and because her sister has a Prince –  it is better to bag a Duke than an ex cricketer?