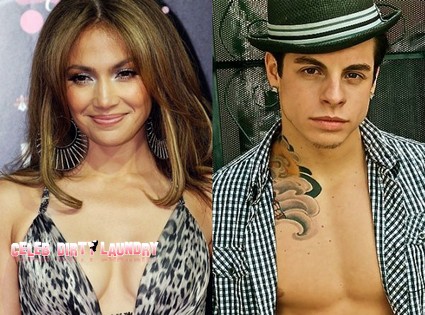 Jennifer Lopez must be serious about staying the course with her young toyboy Casper Smart. JLo insisted on introducing her bratty new boyfriend, who is causing her estranged husband Marc Anthony fits, to her ‘American Idol’ co-stars.

Jennifer split from Marc in July after seven years of marriage and showed she is getting serious about her latest love by inviting fellow judges Randy Jackson and Steven Tyler and the show’s host Ryan Seacrest for dinner with them in Las Vegas after taping an episode.

A source told People: “[They were] dining on Kobe steak and yellowtail jalapeno, along with a bottle of Caymus Cabernet. Jennifer and Casper cuddled up next to one another, exchanging a few small kisses during the dinner. They were all very sweet.”

Marc is sure to be unhappy with the development as it was recently revealed he is set to challenge Jennifer for custody of their twins, three-year-old Max and Emme after he “hit the roof” when he saw pictures of Casper bonding with the youngsters.

An insider said: “It caused a huge blow-up. [Now he is] going back on his word and saying his wants joint custody.”

Those close to the situation insist Marc’s motivation to take action is to make the ‘On the Floor’ hitmaker “suffer” because he is angry she has found love again.

The source said: “He wants to make Jennifer suffer because she’s having fun with someone new, and he knows this will hurt her on the deepest level.”

However, the singer-and-actress is not prepared to give in to her estranged spouse and is ready to fight him to keep the custody arrangements as they are.