Jesse James & Kat Von D To Marry Next Month – What’s Next A Baby? 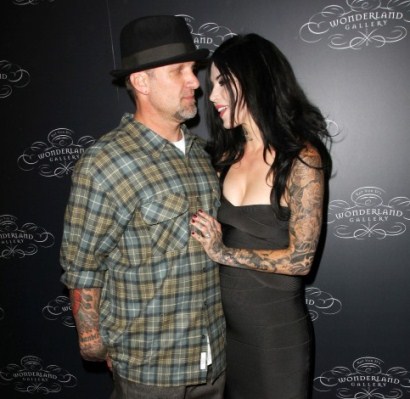 Yesteday it was announced that Jesse James, 41,  and Kat Von D, 28, were engaged to be married.    This will be the forth marriage for Jesse and the second for Kat.  With those great stats I won’t bet on this marriage last long.   Today the news out is that Jesse and Kat are rushing to the alter and are expected to be married in about one month.  They intend to have a non traditional wedding outside California.

A source said:  “Jesse and Kat don’t see any reason why they should wait to trade vows.  They are madly in love with each other and want to make everything official.”

With the rush to the alter wonder if we will see the pitter patter of little feet soon?  I still have to ask why would Kat Von D wants to marry Jesse James? He has been divorced three times, cheated on his wives, clearly a total loser.  I guess she thinks the other women were not right for him but she can keep him faithful.  Well good luck to her… she better make sure Bombshell Mcgee doesn’t live too close them .