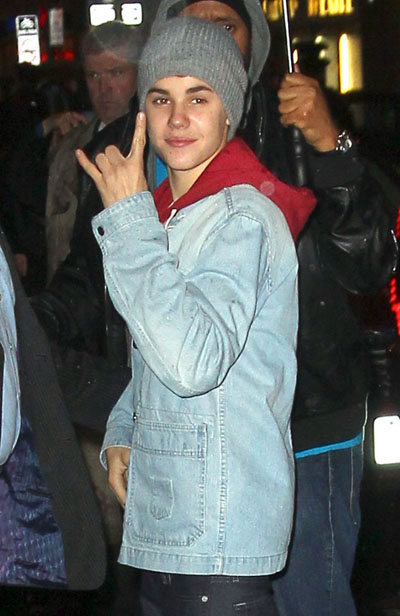 What do you do for Christmas when you’re a famous and rich Hollywood celeb? Read on below to find out.

Justin Bieber: The 17-year-old singer has always been a mama’s boy at heart, so it makes sense the Justin will be spending the holidays with his family in Canada. “Christmas Eve is when [my mom’s side of the family] get together,” said Justin to AOL Music. “It’s also my grandma’s birthday so everyone gets together and we have a good time. Then Christmas Day I always go with my dad and now with my little brother and little sister so that’s always fun. That’s what I’ll be doing this year, I’ll be in Canada with my family.” Hmm…We wonder if Selena Gomez will be unwrapping presents with the Biebers as well?

Prince William and Duchess Kate Middleton: Over in wintry Europe, William and Kate will be spending their first Christmas together as man and wife at the Queen’s retreat in northern England. However, instead of some R&R, their Christmas itinerary includes a royal hunt, black-tie dinners, and a gift exchange with other royal members. (What are on earth do you buy the Queen of England?) There is also said to be a very strict code of manners that Kate will need to follow during the festivities. “It will be a difficult baptism in protocol laced with pitfalls…She’s first the first outsider since Camilla…so all eyes will be on her,” said a royal insider to US Weekly. Somehow, we’re convinced that Kate will do great, as always!

Simon Cowell: The X Factor judge will reportedly be celebrating Christmas alone! After sleeping in until noon on Christmas day, Simon will then board a private jet bound for Barbardos that will supposedly land in the Caribbean after midnight. “Simon and [his fiancee] Mezhgan are spending festivities apart so he may well have a turkey sandwich on the plane by himself. It’s not going to be the greatest Christmas Day ever but it’s what Simon wants to do,” said a source to the Daily Mirror.

Demi Moore: It looks like Simon Cowell isn’t the only one spending Christmas alone. Since Demi’s kids will reportedly be with their dad, Bruce Willis, the 49-year-old actress, who recently filed for divorce from husband Ashton Kutcher, is supposedly planning to catch some rays in Hawaii over the holidays by herself. “She just wants to live in a bikini and a kaftan and not have to bother with putting on her make-up every day. She has dealt with her anger and is now just a heartbroken woman trying to recover from losing he love of her life. Hopefully this getaway at Christmas will help her to start working on herself and getting the old Demi back,” said a source to Grazia via Babble.com.

Tom Cruise and Katie Holmes: The Cruises are currently in NYC, but it’s safe to say that wherever Tom and Katie end up spending Christmas, little Suri Cruise will have a mountain of gifts to unwrap. Reportedly, the 5-year-old threw a temper tantrum this week at FAO Schwartz and supposedly has a Christmas wish list worth $130,000. We hope Santa Clause has a big enough bag to fit Suri’s pony!