Justin Bieber Flips The Bird At Paparazzi In London (Photo) 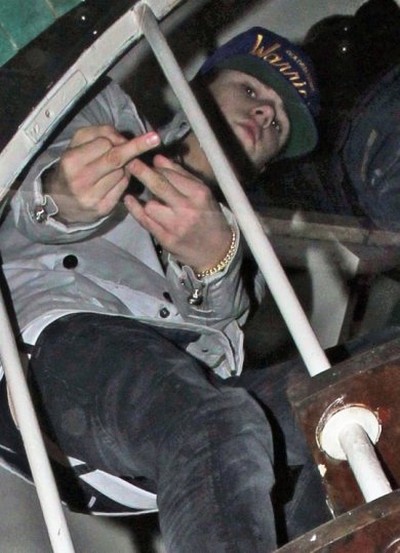 Looks like Justin Bieber can have a bit of a temper as the celeb flipped the bird at photographers trying to get a shot of him when he was out to dinner in London this week. Justin used both his middle fingers to express his displeasure as he left the snazzy restaurant, Mr. Chows, on Monday.

Will Selena Gomez be disappointed since not only was Justin rude using the middle-finger salute but there was a mystery attractive blond in his dinner party that some blogs are suggesting could be his mistress?

The blond lady has yet to be Identified, but she looks to be much older than Justin – older even than Maria Yeater… . Probably someone harmless – in the sense of probably unrelated to Justin’s sex life but with the Yeater accusations all over the Internet we have to mention it.

This incident comes just months after Justin apologized to fans after flipping off paparazzi on his 17th birthday in March.

Justin was on Twitter after he left the restaurant: “UK I will miss you,” followed by “Time for Germany and then back to the states to support @PencilsOfPromis – #MakeAChange.”

Justin didn’t mention his upcoming paternity DNA test… could it be stressing the boy out?