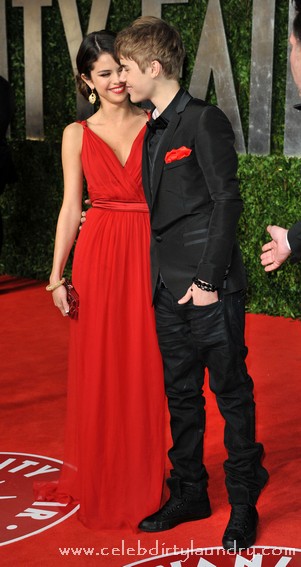 Although the adorable couple still haven’t confirmed their relationship, Justin Bieber and Selena Gomez hit the red carpet at Vanity Fair’s exclusive Oscar party arm-and-arm.  They were even holding hands and gazing into each other’s eyes lovingly.  Confirmation or not the two are clearly a couple.  They have been reportedly dating since mid-December.

The two are so cute they wore matching looks: Justin added a red handkerchief to his Dolce & Gabbana suit, while Selena wore a red Dolce & Gabbana dress.  As the night went on, the pals shared shots on Twitter, showing Selena sitting close to Justin with her hand resting on his knee.

Do you think Justin and Selena look cute on the red carpet?