Kate Middleton Ready For A Baby, She Wants Twins (Photos) 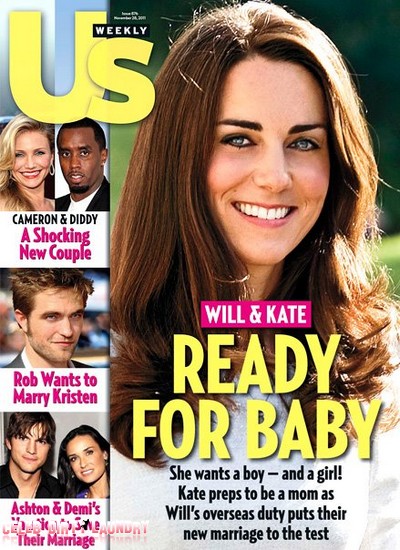 The new issue of US Magazine features the cover story ‘Will & Kate – Ready for A Baby.’  Yikes this is Kate Middleton and baby week rumors.  Both In Touch and Star magazine have stories about her pregnancy.  One problem with all three no one from the palace has confirmed she is pregnant yet.   It was just weeks ago that all the tabloids were reporting that Duchess of Cambridge Kate was anorexic and now they have moved on to the pregnancy story.

The magazine goes on to claim that Kate wants twins, a boy and a girl.   Apparently poor Kate is preparing to be a mom as Prince William is putting their marriage to the test as because of his overseas duty.  Us claims to have all these details and more.

Also included in this week’s issue the rumors that Cameron Diaz and Sean “Diddy” Combs are hooking up.  They report that the two spent some time together last friday in Beverly Hills.  This is not the first time rumors of Diaz and Diddy hooking-up surfaced.  In October when the two were spotted cuddling at NYC’s Catch.  They also have an exclusive story on how Ashton Kutcher and Demi Moore are working on their marriage at Bruce Willis’ vacation home

To find out all this and more pick up the current issue of Us!

Image credit to US Magazine