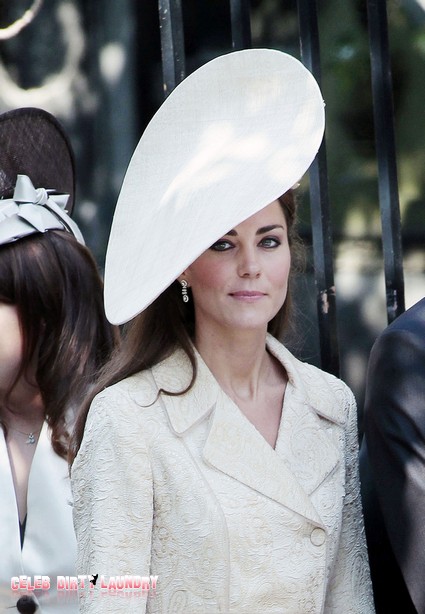 It’s official, Kim Kardashian is a rude witch and no princess, despite what she and her momanager Kris Jenner might like us to think. Kate Middleton, on the other hand, is not only a duchess, Duchess of Cambridge in fact, but the best mannered person in the world!

Kate Middleton was placed at top of the annual etiquette list of The National League of Junior Cotillions ‘Ten Best Mannered People of 2011’ while skanky Kim got a special mention as “Most Ill-Mannered” person of the year.

The National League of Junior Cotillions teaches people how to behave properly – emphasizing courtesy and character – two attributes in which Kim is entirely lacking. Take for example how Kim’s goofy husband Kris Humphries learned that his darling wife was filing for divorce… he read about it online.

The League teaches etiquette in its social training programs and their annual list ranks actors, celebrities, singers and athletes based on their “demonstration of dignity, honor and respect,” according to NLJC national director Elizabeth Anne Winters.

Praised for “the poise and dignity with which she conducts herself in the public spotlight,” Prince William’s wife of eight months was the clear front-runner for this year’s top spot, said Winters.

Kim was ridiculed for “making a private matter public and disrespecting the institution of marriage.“

Justin Bieber (no. 2 on the list) and Paula Abdul (no. 3) were also praised for their behavior this year, as were Taylor Swift (no. 5) and Harry Potter’s Emma Watson (no. 9). Nice to see Justin make the list – he is only 17 years-old from a poor family and with little formal education and yet everybody loves him and his best-selling music. He charms people everywhere he goes and except for the occasional angry middle finger is the perfect little gentleman.

Kate Middleton compares to Kim Kardashian and her sisters – like Cinderella compares to her evil and ugly step-sisters.