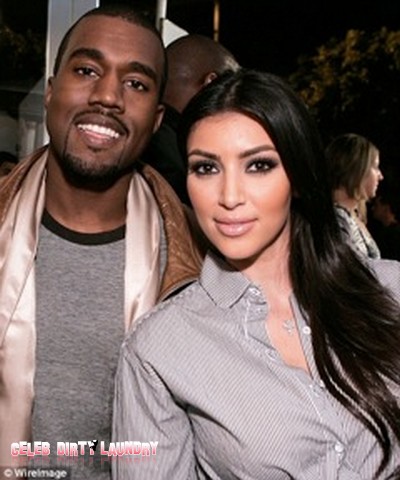 She only filed for divorce from Kris Humphries a month ago, but rumor has it that Kim Kardashian is already out there flirting it up with megalomaniac rapper Kanye West.

According to the New York Daily News, Kim was seated front and center at the musician’s “Watch the Throne” concert with Jay-Z on Tuesday at L.A.’s Staples Center. Onlooker’s report that Kim was dancing in the ultra VIP section with Khloe, Kris Jenner, Scott Disick and a very pregnant Beyonce, but was getting all the attention from the rapper. Kanye was reportedly playing up to Kim all night, even grabbing a bottle of champagne from Khloe, drinking it and throwing it on the ground to attract attention from the reality star.

The flirtation continued at an after party thrown by billionaire Rob Burkle in Hollywood. A source claims “Kanye was eating Kim up like she was a piece of cake. He was all over her — caressing her head, touching her waist.”

The two have been surrounded by romance rumors in the past. Kanye made an appearance on “Kim & Kourtney Take New York” last season, and the pair starred together in a Comedy Central sketch about Star Wars earlier this year.

Although pals of Kim insist that the two are strictly platonic, Kanye’s ex-girlfriend Amber Rose alluded to something more going on between the rapper and Kardashian when she appeared on The Wendy William’s Show in November. “’I mean, come on, like, you know.” The model responded, laughing awkwardly. “Come on! We’ll keep it cute.”

I think it’s a good thing if Kim and Kanye hook up. After all, Kanye might be able to help Kim release a follow up to the riveting track “Jam (Turn it up)” and Kim can knock Kanye down a few pegs when she dumps him via the media.