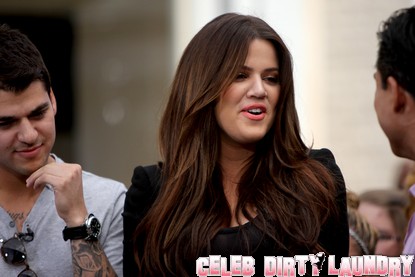 Oops did I say fat?  I meant to say bloated :-) what’s the difference?  Not much as far as I am concerned just a nice way of saying it LOL  Last night Joy Behar sat down with Kourtney and Khloe Kardashian to talk about their multiple reality shows, their secret plan to marry every player in the NBA, and Kim’s pregnancy rumors. With these candid ladies, you never know what will come out of their mouths next, and they certainly have no shame in the family’s dysfunctional yet entertaining behavior!

The KarTRASHian sisters realize the more outrageous they are the more publicity they get.   Klhoe quickly squashed the rumor that Kim is pregnant:  “No, she’s not pregnant, but I guess she’s bloated! Must be that time of the month, who knows?” Can someone just smack her now.   And Khloe wasn’t shy of sharing her opinion on her mother Kris’ desire to change her last name back to Kardashian:  “When Bruce was popular she wanted Jenner. Now that Kardashian is popular she’s going back to Kardashian. Like, you cannot jump ship! And eventually, I told Kourt, if Lamar wins another championship she’ll change it to Odom! She’s so crazy, like I’m not down for that.”

ughhh I guess we know where the girls got there repulsive behavior from.  The apple does not fall far from the tree!  I suppose the only nice thing to say about them is they are honest about what they are fame whores the daughters and mother.  Check out the video below if you have nothing better to do!