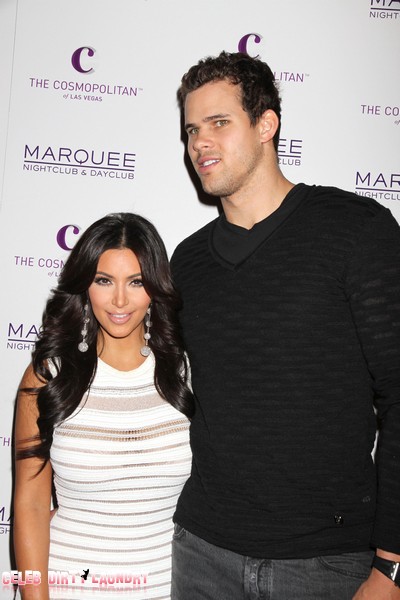 All the noise about Kim Kardashian And Kris Humphries Marriage coming apart has been verified by a TMZ video we have below of the couple fighting.

Kim Kardashian has already admitted in print that her freshly minted marriage to Kris is far from “ideal.” Kim wed the currently unemployed and partying NBA star in August while she is working like a dog to get ahead with her lucrative Kardashian branding game Kris just seems to party while the NBA season remains suspended.

To add insult to injury the last thing Kim wanted to see was her husband partying with sleazy and stupid Vinny Guadagnino from Jersey Shore.

US Weekly reports that Humphries and Guadagnino had a “boys night out” Tuesday at STK in L.A. The pair were ready to party and without Kim to chaperon they “seemed to be in good spirits.”

Humphries and Guadagnino flew together from New York to Las Vegas earlier this month. “Kim slept the entire time while [Vinny and Kris] chatted the whole way,” an eyewitness says.

Imagine Kim’s disappointment with her marriage to Kris – here she had hoped that they would come across as the new married Hollywood royal couple – like Prince William and Kate Middleton – but instead there is hubby Kris partying like a Jersy Shore punk!

There was already a big fight earlier in the week as US weeklt reported that the newlyweds had a huge fight days before Kardashian’s Oct. 21 birthday. “They had it out!” a family friend spilled. “She told him he needs to do something productive… He needs to get off his ass, like, yesterday.”

Well it looks like things have gone form bad to worse for the couple as the video indicates.