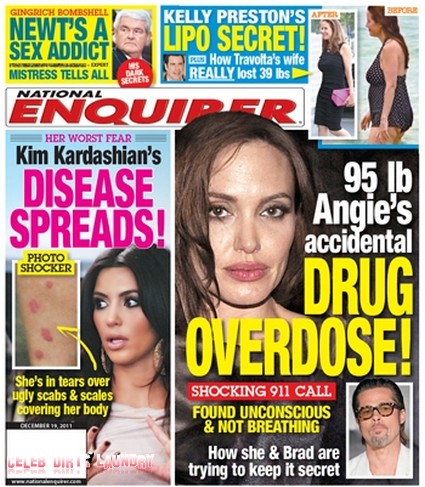 In the new issue of National Enquirer they featured the cover story ‘Kim Kardashian’s Disease Spreads.’   The magazine has the scoop on Kim Kardashian‘s worse fear which is to have her psoriasis spread they say.  I think they have that wrong and Kim’s worse fear is to have Kris write a tell-all LOL.

In late summer 2011 after finding red, flaky patches of skin on her legs, Dr. Harold Lancer diagnosed the Kim with psoriasis.  Now with the stress of the divorce with Kris she is in tears because of the ugly scabs and scales covering her body.  Psoriasis goes through cycles in which the condition flares up for a few weeks or months, then subsides for a period of time.  Stress does not help it.   The magazine has pictures of her condition and how bad it has gotten.  Psoriasis sucks but in Kim’s case Karma is a bitch LOL..

Also included in this week’s issue they claim Angelina Jolie had a drug overdose.  Of course it was accidental and according to them poor Brad Pitt had to call 911 and found her unconscious and not breathing.   She is down to 95 lbs and Angelina and Brad are trying to keep it all under wraps.  True or False?  You be the judge!

The magazine claims that that Kelly Preston’s 39 pound weight loss which she attributed to Scientology magic was actually done by lipo.  Sadly, we can’t take anything said by Scientologists at face value so we buy the lipo.

If you need to find out more about all of this pick up the current issue of National Enquirer!