Kirstie Alley Is Still Delusional About Her Size 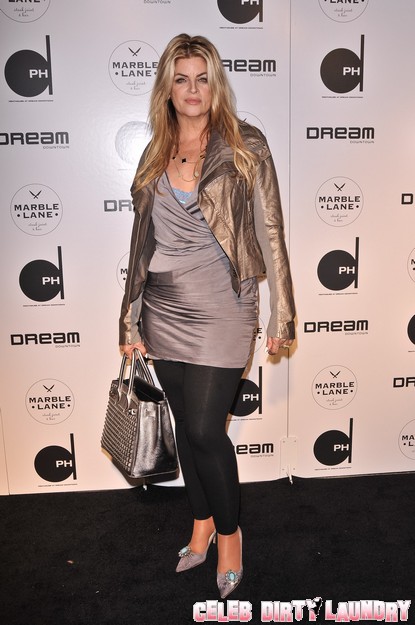 As much as I like Kirstie Alley, I think that there is something way delusional about the way she sees herself. We will give her credit, she lost a ton of weight during the last season of Dancing With The Stars. She looks great! But — she has always been flakey about her vanity – ALWAYS.

Why, you might wonder? Well, at the beginning of the show, she claimed that she was a size twelve. Then, she miraculously danced her way down to an eight (according to her) — then she hit a six! Ha. No she didn’t.

She lost a reported 60 pounds this year, just from dancing her butt off. That is an accomplishment on its own merits. But to lie when everyone has eyes and can see the facts? That’s just terrible. We’re not putting Kirstie down at all, she’s great and has always been a wonderful actress. She’s almost as good of a liar, too.

Above is a photo of Kirstie, taken just two days ago… Now you tell me, does she look as small as someone like Megan Fox? No?!??? Her magic mirror tells her that she might. (Delusional.)

In a new interview, Kirstie said, “My goal dress has a waist that’s 22 inches. I tried it on, and I can almost zip it up.”

She went on to reveal that she plans on wearing the dress on her vacation in Italy in a few weeks. She said, “I’ll be my target size by then.”

Life & Style magazine interpreted that to be the same as Megan Fox’s physique, which she busted her butt for with a metric ton of Pilates.

We love her personality, Kirstie is great…but someone is changing the label on her clothes or something. Her stylists, maybe? She looks good, there’s no doubt about that…but 22 inches? I hardly think so. What do you think?