Kristen Stewart And Robert Pattinson Had To Train For Sex Scene 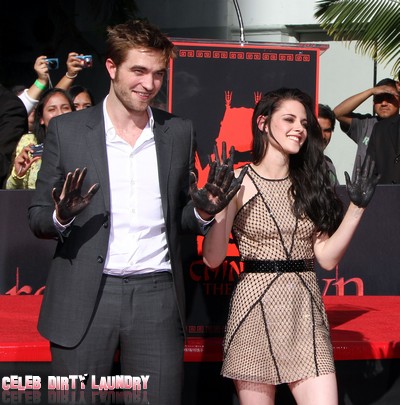 Kristen Stewart and Robert Pattinson had to work out before shooting their ‘Twilight Saga: Breaking Dawn’ sex scene.  The real-life couple’s alter egos Bella Swan and Edward Cullen get intimate in a scene in the final installment in the vampire franchise and realised at the last minute that their fans wouldn’t want to see them looking out of shape.

Kristen said: “I know I’m tiny and s**t. I did ‘On the Road’ right before ‘Breaking Dawn’ and I definitely did hang out a little bit.”

“Then when I was doing prep for ‘Breaking Dawn; I suddenly realised, ‘This is so not ‘On the Road’. People definitely want to see you looking trim.'”

“Usually, we’re all making fun of Taylor Lautner for working out so often, and then suddenly me and Rob were like, ‘S**t’ and running around the block while Taylor laughed at us.”

Kristen also admitted she was put in “total lock down” so no one could catch a glimpse of her character’s wedding dress in the final movie, but she can’t wait for fans to see the scene.

She added in an interview with Britain’s Glamour magazine: “I had to be so shrouded in secrecy the entire two days of filming. It was crazy. I was on full lockdown, as if I was wearing millions of dollars worth of diamonds, but it was just a dress.”

“I think the dress is beautiful and I’m so excited for the wedding to be revealed. It was one of those moments you go, ‘This is something to remember.’ And you want to put yourself in the experience so it doesn’t pass you by.”