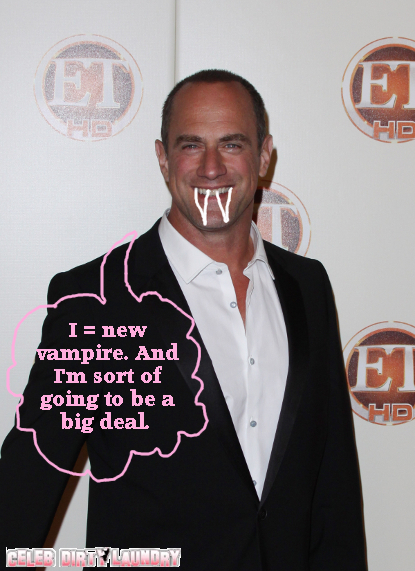 Even though the show’s return is still months and months away, the list of new characters for Season five of True Blood just keeps growing.  I for one am suffering a major Fangover in the wake of season four.

First off, there was the addition of Scott Foley as Patrick (long lost soldier pal of Terry) in the season four finale.  Then, the announcement that Vampire Eric’s lil’ sis Nora (British actress, Lucy Griffiths) is coming to Bon Temps and will feature prominently in the season.

TV Line revealed the latest announcement which involves former SVU hunk, Chris Meloni returning to the small screen following his departure from SVU last spring.  Show producer, Alan Ball has confirmed Meloni will play “An ancient, powerful vampire who holds the fate of Bill and Eric in his hands.”

And on the hairier side of things, the show is said to be beefing up things in the werewolf department (if Alcide is any indication of the wolves they’re looking for, beefy is a requirement). There are rumors of Alcide’s wolf-father entering the picture (yet to be cast but I smell daddy issues) along with some she-wolves including late pack-leader, Marcus’ mom and a young she-wolf intent on sniffing the mystery around Marcus’ death.

Well Trubies… according to Wet Paint, the True Blood writers are hard at work mapping out season five and the actors have already had their first table read.  We can hang on til next summer, right? Sigh….