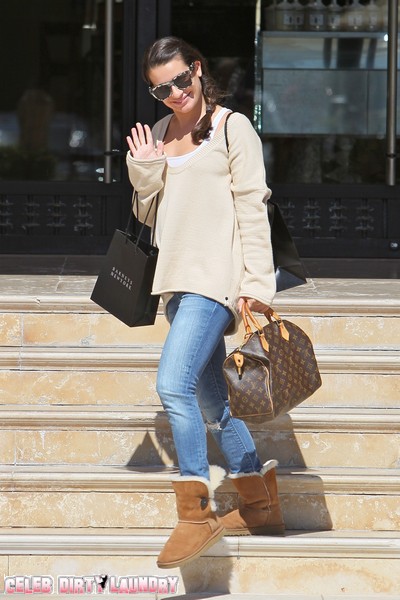 Lea Michele‘s says her ‘Glee’ sex scene with Cory Monteith was “way awkward” – and with all those cameras and lights and people watching what would you expect?

It all happened in the scene when Lea’s character, Rachel Berry, is set to lose her virginity to on/off boyfriend Finn Hudson, played by Cory, and while Lea is thrilled with the overall result, she admitted shooting the intimate sequence was difficult because she sees Cory as a “brother.”

Speaking to E! at the 15 year anniversary party for Mohegan Sun Resort on Saturday night she explained: “Oh my god, it was way awkward. I adore Cory. He’s like my brother and to have to do some of the stuff we did in front of our entire crew … it’s so less sexy than you think. Really, we were in a room with like 20 people around us, sitting by the fireplace. He was sweating so much. I was so grossed out!”

“But I saw some photos and I was like, ‘Damn! We look good.’ As a fan of the show, it’s something I wanted to see for awhile and it’s very interesting how everything plays out.”

Despite the awkwardness, Lea is thrilled with the direction the writers have taken with her character and happy they decided to have Rachel finally sleep with Finn.

She said: “It’s very interesting the way that it’s bled into the story line. I love the choice that they made with how it sort of happens. But everything is really a lesson for Rachel to be learned; she sort of makes a decision but always learns a lesson.”