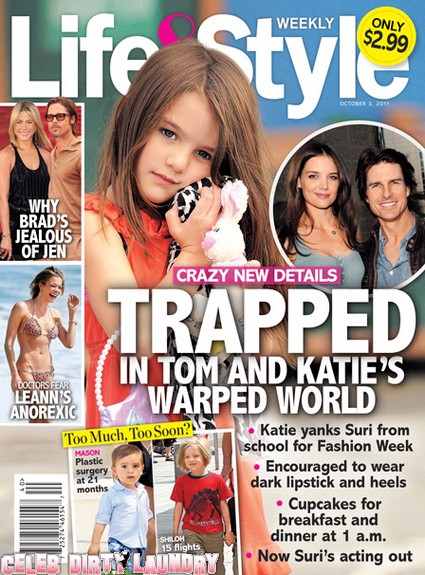 The October 3rd, 2011 issue of Life & Style magazine‘s cover story is featuring Suri Cruise and how she is trapped in Tom Cruise and Katie Holmes warped world.   Even though Suri who is five was suppose to be at school at her second day of kindergarten at New Village Leadership Academy in LA,  Katie did not send her and instead took her to fashion week.

They also allow Suri to wear heels, makeup, dark lipstick, play with Penis shaped candies, stay up to all  hours of the night etc etc.  The magazine sees this all as the start of Suri acting out.

Celeb Baby Laundry has more: A former employee says: “Because Suri is being raised a Scientologist, both Katie and Tom have to treat her like an adult. There’s no coddling, and they never tell her anything — they ask. So when she wants to wear her Cinderella costume to bed, she gets to. When she demands a manicure at 9 p.m., she gets it.  And that includes treats for breakfast! “

The magazine also includes Kourtney Kardashian‘s son Mason who is rumored to have already had plastic surgery, Shiloh Jolie-Pitt who has already taken 15 trips this year and Madonna’s daughter who has a $10,000 credit card limit.

Only the future will tell if these children will grown normally after getting so much, so soon in their life.   I know one thing that is pretty much certain, I would not want to be Tom and Katie when Suri hits her terrible teen years or may even her tweens.  What are your thoughts?  Sound out in the comments below!

Life & Style has more on how some celebrities try to give their children a balanced life.  Pick up the current issue which is on stands now.