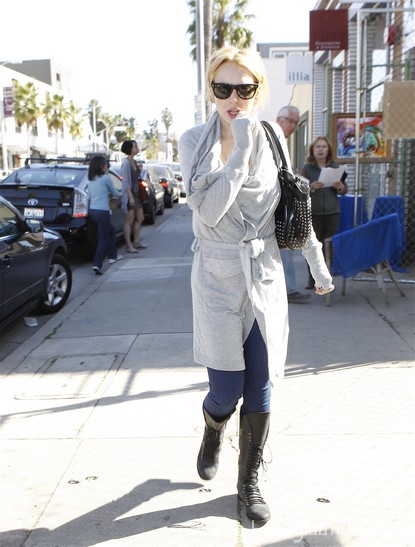 Lindsay Lohan pictured above was leaving a sunglass store in Venice Beach, CA today after getting her eyes checked.  Lindsay moved to Venice Beach and right next to ex-girlfriend Samantha Ronson after completing her stint in rehab.  As she explored her new neighbourhood she was inundated by hundreds of paparazzi.   Lindsay recently said she is so fed up and frightened with the number of paparazzi following her that she wants to get the police involved.

Lindsay has to be happy today a list released of  The Worst Celebrity Influence On Children and Lindsay was not number one she was beat out for that dubious honour by Miley Cyrus.  She was of course on the list.  Lindsay is working on her sober lifestyle  – how long do you think it will last?