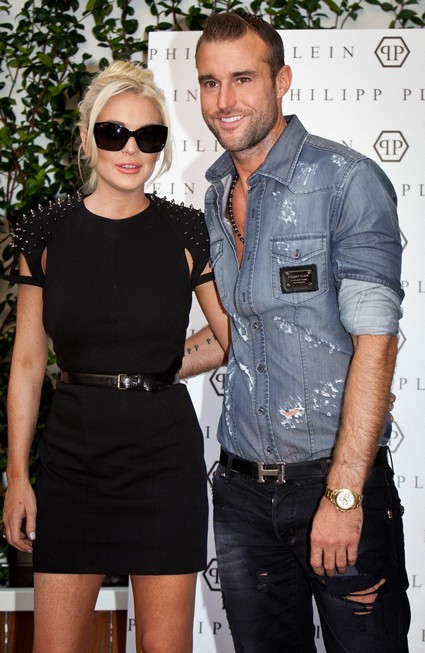 Lindsay Lohan seems to have found some gainful employment for a change – since we can’t really count her sentence to do community service as ‘a job.’ Lindsay was sentenced to 480 hours of community service as part of her probation for pleading no contest to stealing the 2,500-dollar necklace from an Los Angeles jewelery store but there is no paycheck for that job.

Now Lindsay has landed a gig as fashion model for designer Philipp Plein.

After being bounced out of consideration for the ‘Gotti: In The Shadow Of My Father’ production due to her legal problems Lindsay has been in the news only for her bad behavior. So its a nice thing for her that she’s being talked about for career-related reasons and not her propensity for trouble.

After her battles during the recently completed New York Fashion Week with Jasper Richen and Vikram Chantwal’s wife Priya Sachdev, the 25 year-old actress and model was at another Fashion Week – this time it was Milan’s.

Lindsay was unveiled in Milan as the new face of fashion designer Philipp Plein’s latest line. E! Online reported that Lohan appeared alongside the designer in a sleek, tight dress where she posed for photographs and took questions about the announcement. A statement released by the designer said of the star, “Lindsay is a beautiful, highly acclaimed actress and model. We will be able to create unique images: Refined and luxurious, but also full of sensuality.”

As far as Lindsay’s community service requirement goes, the New York Post quotes a source as saying that Lindsay is not taking it seriously and is falling behind: “Lindsay’s team is telling her she needs to log significant time to show the judge that she is working towards completing her hours, but she is ignoring them, Lindsay’s rationale is that she has a year to complete the service, so she isn’t concerned about it right now.”