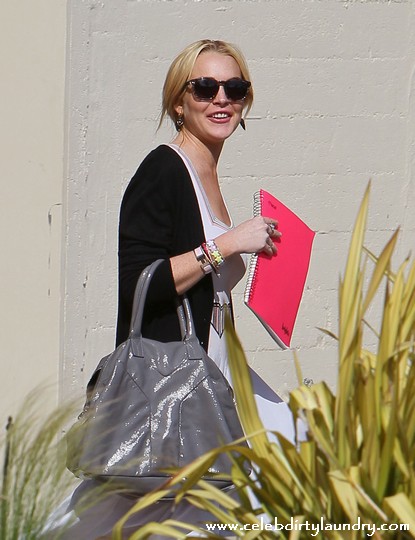 Lindsay Lohan has hired a new publicist in an attempt to repair and polish her tarnished image. Of course if Lindsay could simply obey the law for a little while her image might improve.

The starlet has hired Hollywood publicist Steve Honig of The Honig Company, whose clients include Fiore Films, the production company that is producing Lohan’s upcoming role in the mob bio-pic Gotti: Three Generations.

Honig will handle all of Lindsay’s public relations and publicity – she hasn’t had a full-time publicist since she parted ways with Leslie Sloane several years ago.  Lindsay formally pled no contest Wednesday to a misdemeanor grand theft charge.

“I am glad to be able to put this past me and move on with my life and my career. I support the judge’s decision and hold myself accountable for being in this situation. I have already started my community service at the Downtown Women’s Center and thank everyone there for their warm welcome. I hope to be able to fulfill my obligation without any press attention. I think the media spotlight should be on issues such as homelessness and domestic violence instead of on me.”

Its great that Lindsay has decided that she knows what issues the media should focus upon. Lindsay seems to forget that people love gossip – and especially nasty gossip of which she is a constant source. Perhaps she should tell the film production companies to focus on homelessness and domestic violence… .

Lindsay will be on probation for three years in connection with the grand theft.