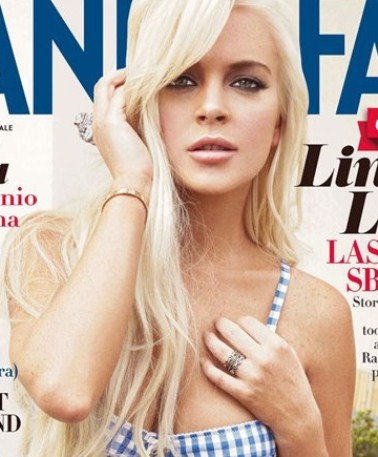 Lindsay Lohan graces the cover of the August 2011 Issue of Vanity Fair Italia.  In the photoshoot Lindsay in has over bleached hair and plumped up lips and she gives her best sexy look.  Lindsay clearly has a Marilyn Monroe wanna be thing going on.  It is failing though, she comes off looking like cheap trailer trash.

In the interview Lindsay tells the magazine how she has made mistakes (understatement of the year) but boo hoo the sentence she was given for all her screw-ups was too harsh.  She said: “Unless you’re a killer, I don’t see a reason to stay there. I never hurt anyone but myself.”  Wait a second perhaps Lindsay is s till on crack.   What about all the times she was driving drunk and could have killed someone.  The girl is disillusion!

Wait it gets better she packs a gun –  “She brings out a pink fur jacket and a gun: ‘I’ve got a permit to carry a firearm, but it’s not loaded, I keep it in the house in case someone tries to get in.”  Now isn’t that just a recipe for disaster.

But of course Lindsay tells the interviewer she wants to put all her problems behind her and concentrate on her (I’m Laughing) acting career.  In October she begins work on the mob movie ‘Gotti: Three Generations’.   I am hoping her part is really really small because I was looking forward to the movie.  So what do you think is Lindsay right?  Was jail too harsh for her.

Click on the thumbnails below to enlarge more pics of Lindsay’s photoshoot!