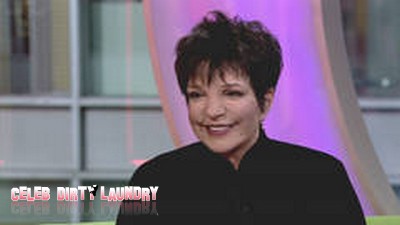 Liza Minnelli tripped over her own pet dog and broke her leg in 3 places. The celeb daughter of the great Judy Garland and director Vincente Minnelli, was being escorted to her car in a wheelchair by her security crew when she was questioned about the mishap on video below.

TMZ reports: Liza Minnelli was being pushed around New York in a wheel chair this weekend … after breaking her leg in THREE places — but according to the singer, it’s all her dog’s fault.

Minnelli has been married (and divorced) four times. Her first marriage was to Peter Allen (full name Peter Allen Woolnough) on March 3, 1967. Australian-born Allen was Judy Garland’s protege in the mid-1960s. They divorced on July 24, 1974.

Later that year, she married Jack Haley, Jr., a producer and director, on September 15, 1974. His father, Jack Haley, was Garland’s costar in The Wizard of Oz. They divorced in April 1979.

Minnelli was married to Mark Gero, a sculptor and stage manager, from December 4, 1979 until their divorce in January 1992.

She was married to David Gest, a concert promoter, from March 16, 2002, until they divorced in April 2007. (They separated in July 2003.)  Minnelli also had a relationship with Desi Arnaz Jr., the son of Lucille Ball and Desi Arnaz.

Minnelli has no children; one pregnancy left her with a hiatal hernia as a result of the medical steps taken to try to save the baby.

Hopefully the 65 year-old Liza will recover without complications.