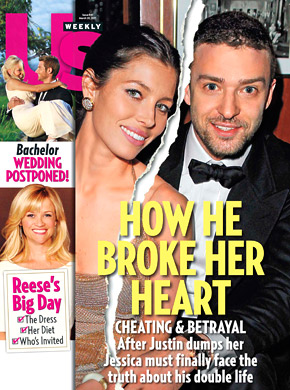 Talk about unfaithful!  It seems that Justin Timberlake will not be winning any boyfriend of the year awards in this lifetime.  Read below a list of some of the indiscretions Mr. Timberlake got up to while supposedly in a relationship with Jessica Biel.

Winter 2007: JT hooks up with a girl he met at a bar and had only spoken to for 15 minutes. “He found her Southern accent irresistible, the woman bragged to a friend, also revealing that she picked him up, and that he was an amazing kisser.  According to the source, she and Timberlake dashed off to her apartment around the corner for a quick interlude, then he returned to the bar to rejoin his friends.”

A source tells Us Weekly:“Justin often used a certain friend as a mule for the chicks he wanted to get with.  He’d meet them at the club, then have a friend get the number or the friend and the girl would make their way back to Justin’s separately.  No one batted an eye.”

JT tried to get with Rihanna circa Fall 2008, but she “would not go there.”

Ciara also wasn’t into it.

Kate Hudson and JT might have hooked up in December of 2009 – just before Kate and Alex Rodriguez split.

Fall 2010: Olivia Munn. They met in September and immediately began an affair.  A source says they had “amazing sex.” A source says Timberlake wanted to continue the affair, but Olivia “didn’t want to be the other woman.”  That source is likely Olivia Munn.

When Jessica Biel “insisted” on throwing Justin a birthday party (he said he “just wanted a quiet night, even telling her he had to work”), Justin called up his lover Olivia Munn to complain.  At that point, Olivia and JT were in “steady contact” although Olivia had “given him an ultimatum” to dump Biel.

JT’s “pickup tricks”: He flirts, shamelessly, and then he dances. Then he “pursues his interests with passion”. He “constantly” texted Olivia Munn and he blocked Mila Kunis from talking to other men.  He also flatters, shamelessly.

Biel believed that JT was faithful because “there were never any truly incriminating photos, voice mails or texts… if Jessica ever had proof that he had cheated, she would have left immediately.”

The Mila Kunis Situation:A source says, “Everyone is trying to put Mila in the middle of this breakup, but nothing happened between them.”  According to the source, JT tried the whole “Jessica and I aren’t really together, now let’s hookup” angle on Mila, but “Mila knew he had a girlfriend and made it clear it wasn’t going to happen.”  And JT’s chances with Mila aren’t any better now that he’s single – “He tried every trick in the book, but Mila is not attracted to him.”