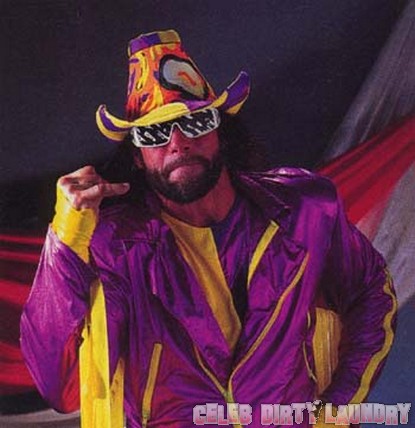 Randy was one of the most colorful and famous wrestlers in the business. He made “Ohhhh yeah!” his signature catchphrase and was a wrestling legend. Sad news today, folks.

After getting behind the wheel of his car, he suffered a heart attack at around 10AM today. According to his brother, Lanny Poffo, he lost control of the vehicle and died.

On May 10th, he celebrated his one year anniversary with his wife, Lynn. He was previously married to Elizabeth (Miss Elizabeth) Hulette, but they divorced in 1992. She passed away in 2003 from an apparent drug overdose.

He was only 58 years old. So sad. He was one of the greats in wrestling. Even if you weren’t a fan of the sport, chances are you’ve seen his work or heard of him. He was a great personality in and out of the ring.

RIP. So sad. Our condolences go out to his family and friends.