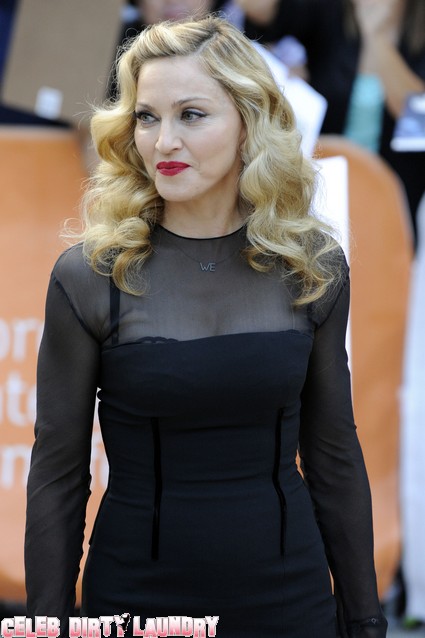 Following Madonna’s Hydrangea incident, rumor has it that Madonna was acting like a real diva at The Toronto Film Festival. Apparently when ‘Queen’ Madonna walked by security guards reportedly ordered volunteers (her loyal followers) to turn away so they did not gaze at her.  It all went down September 12th, 2011 during and event to promote her new directorial project W.E.

The excuse for the whole incident is that Madonna wanted to walk the hallways undisturbed and not have pesty fans bothering her.  All I can say is ughhhhh….  A spokesperson for the event was so upset they defended the volunteers saying: ” Of course, it flies in the face of what we stand for as an organisation. Our volunteers are the heart and soul of the festival. They keep it running on all cylinders.”

However Madonna’s rep says it is all bulls**t and Madonna never gave her security team those instructions.  She said:  “Neither Madonna nor her security ever gave instructions for the volunteers to turn away from Madonna. In fact, she was so impressed with the volunteers that she publicly thanked them from the stage for their hard work before the premiere of her film last night which earned a standing ovation…

“I don’t know how it happened or where it came from. I still haven’t found out who did it but Madonna didn’t do it. We are still trying to figure out who and why anyone would ask the volunteers to turn away from Madonna. She has never and would never ask anyone to do that ever.”

Sounds like damage control to me.   Someone should tell Madonna that is the price of fame!