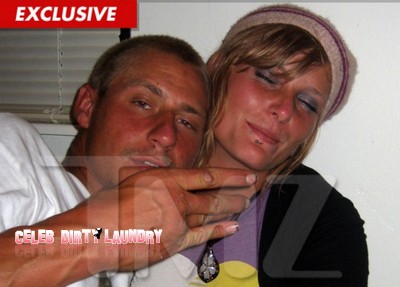 Justin Bieber never had sex with Mariah Yeater and in fact never even met her according to his lawyers, and we believe them. Pictures of skanky Mariah Yeater together with her sleazy boyfriend Robbie Powell (look at his fingernails – gross) from right around the time that Mariah got pregnant have been obtained by TMZ and we have the picture above.

Just four days prior to Mariah filing her paternity claim against Justin Bieber she and Robbie were questioned by cops in relation to a drug bust in San Diego. While the two were not charged with any crime at the time it is pretty clear that Mariah’s poor baby is destined for a true trailer trash style childhood as long as he is with his mom.

TMZ reports: TMZ has obtained photos of Mariah and her ex-BF Robbie Powell from last September and she gave birth ten months later. It’s not exactly nine months, but it might be close enough.

As we first reported, Mariah texted friends after giving birth in July — begging them to tell Robbie “how important it is for him to be in his son’s life.”

Please take the paternity test quickly Justin and prove beyond any possible doubt that you never touched this desperate skank. Let Mariah and Robbie slink back into obscurity and take their miasmatic stain with them.