Meryl Streep Covers Vogue But She Fears She Looks Grotesque 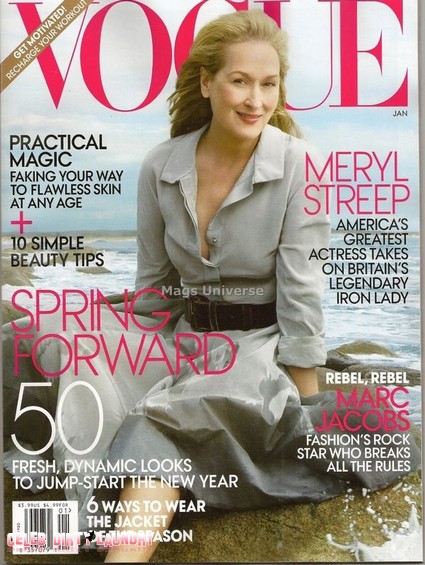 Meryl Streep is widely regarded as one of the best living Hollywood actresses but her fear of looking ‘grotesque’ almost ended her career 22 years ago. When she turned 40 Meryl was offered the role of a witch three times – and this combined with her marginal looks made her fear that she and other women over 40 were looked upon as “grotesque on some level.” Well Jennifer Aniston is 42 and she was just named ‘Hottest Woman Ever’ by a men’s mag – so either times have really changed or Meryl should accept the fact that she is no beauty. In any case, at 62 years of age Meryl is covering the January issue of American ‘Vogue.’

Meryl’s career struggles have helped her with her most recent role, playing British Prime Minister Margaret Thatcher in ‘ The Iron Lady.’

Speaking of her admiration for the former leader, she told the January issue of America’s Vogue magazine: “It was a men’s club. There were women there but I think it was 16 or 17 out of 630. The world was changing. You could feel the old order breaking down. There were many people who really didn’t want it to change. You could feel it.”

“White-hot rage that didn’t speak – just emanated. I’m sure she experienced that.  It’s hard to quantify which prejudice kept her out of the inner circle more. But for her to achieve that at that time was incredible. Incredible. And to stay there. And stay there. To be the longest-serving prime minster of the 20th century. Amazing.”

Ironic that Thatcher was such an arch conservative – no feminism lived in her heart.