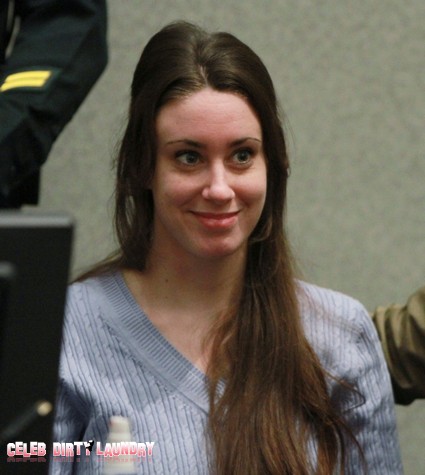 No evil deed goes unrewarded – at least this seems to be the case for murder mom Casey Anthony.  Casey managed to somehow avoid conviction on murder charges although everyone in the world knows she killed her little child Caylee. I mean Casey was looking up how to murder her little girl on the Internet and then mysteriously ‘forgot’ to report the child missing… . But all that appears to be in her past as her agent/producer Scott Sternberg is hard at world to make sure Casey makes lots of money for killing her daughter and escaping justice. It’s a brave new world indeed.

Anthony has been in hiding since a Florida jury found her not guilty of killing her daughter Caylee, and now producer Scott Sternberg has been pitching a “no-holds-barred” interview with Casey, according to the Hollywood Reporter.

Multiple sources said Sternberg is asking for “between $500,000 and $750, 000,” and the proposal says the network could choose the interviewer and Scott Sternberg Productions would co-produce the show.  Casey has not spoken publicly since being acquitted of the murder charges, but as RadarOnline.com previously reported, she did wear a wacky disguise for her deposition in the civil defamation lawsuit against her.

Casey’s parents have given a lengthy interview to Dr. Phil McGraw and he made a donation to their charity, Caylee’s Fund, in exchange for the sit down.  However, the backlash that was so strong against Casey immediately following her acquittal continues, and multiple cable networks have declined the interview, including Discovery Communications’ TLC and ID and A&E Networks’ Lifetime and A&E.

Cable executives have said that while the ratings would probably be huge for the show, “the backlash would not be worth it.”