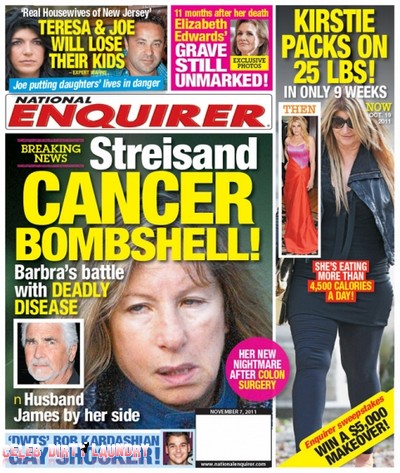 The October 31st, 2011 issue of National Enquirer features the cover story ‘Barbara Streisand – Cancer Bombshell.’  The magazine claims to have the breaking news on Barbra Streisand’s battle with the deadly disease.   Her husband James Brolin is standing by her side.  They have the details of her nightmare after colon surgery.

This is not the first time National Enquirer has broken news that Barbra had cancer.  In December 2004 they ran the story that she had undergone a secret cancer operation to remove part of her colon. Barbra later confirmed reports she underwent surgery earlier to remove a polyp in her colon.  Polyps can be an early sign of colorectal cancer.

I certainly hope the magazine is off track with this story.  Also included in this week’s issue Dancing With The Stars Rob Kardashian’s gay shocker, hmm wonder what this is about.  They also claim that  Kirstie Alley has packed on 25 lbs in 9 weeks.  They also have the before and after pictures.

If you need to find out all this and more pick up the current issue of National Enquirer on stands now!